I lost a good friend today. He was my constant companion for a little over 20 years. My first pictures of him were taken with a 35mm film camera (remember film?). He was born a tiny, talkative ball of grey fluff with big blue eyes. And while the eyes would later turn green, his ongoing attempts at conversation earned him the name “Noisy Cricket” (a reference to the movie “Men in Black”). 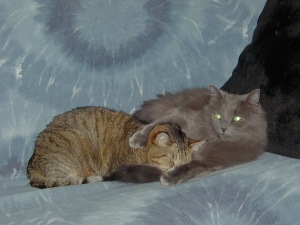 He was a huge cuddle monster and loved to snuggle up with my other cat Fuzzy. When she got sick, he stayed on the couch with her and kept her company.

When Fuzzy finally passed he did much the same service for me, spending almost a solid week either in my lap or following me around the loft. He always knew when I was sad and always wanted to help.

For quite some time, it was just the two of us, and he really seemed to come into his own oddball personality. Much of this seemed to involve finding unique places on which to perch himself and chatter at me. He would climb up onto the ceiling in the loft and perch like a fluffy gargoyle. This was a little disconcerting in the darkness, with just his green eyes staring down at me.

He also like to get on top of the refrigerator, hang his head upside down off the edge and beg for head scratches while I cooked dinner.

For his frequent yodeling practice, he preferred the acoustic properties of the bathtub, where he would sing to me the songs of his people and gently maul my rubber duck collection.

He was also an enormous flirt. When I lived at the cotton mill lofts, I was on the ground floor right next to the pool. This was a high traffic area in the summers. Cricket had a favorite spot in the front window and when women would pass by, he would start rubbing himself back and forth across the window and meowing to get their attention. They would come to the window and coo over him and he just ate it up. He didn’t do this for guys and I have no clue why.

He was eventually joined by other cats. The first was Valentine, an equally fluffy white cat who became his snuggle buddy. Together they helped to insure that any clothing I owned had a visible amount of cat hair on it (I have spent a small fortune on lint rollers). The two of them managed to share lap time without issues and spent a considerable amount of time sleeping in a small cat pile.

Later on, Missy came into the picture. At first, she and Cricket did not get along. Missy had been outdoors on her own and was probably borderline feral when she first adopted me. It took a bit of time, but she eventually warmed to Cricket and spent a huge amount of time grooming him. Often to the point where he looked like an extra from the movie “Grease.” After some adjustments, Missy joined the cat pile and all was well.

For most of his 20 years, Cricket’s favorite place to sleep was on top of me. This was fine in the winter, but a little warm in the summer. I sleep on my side and he would just stretch himself out along my other side and purr. I would wake up sometimes in the morning and just find him there, with no memory of him climbing up onto me in the night.

I think I will still feel Cricket’s weight on my chest for a while, even though he isn’t there anymore. He was a good cat and he will be missed. 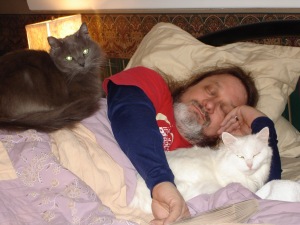