Fuzzy – 4/28/92 to 3/5/02 On March 5th of 2002 I was forced to say goodbye to a long time companion, my cat Fuzzy. I can think of no more fitting memorial to one of my best friends than to share my experiences with anyone who reads this.

I adopted Fuzzy from the Atlanta Humane Society on June 27, 1992. She was 2 months old which would have put her birthday and mine at right about the same time. For the last nine years we have celebrated our birthdays together. Unfortunately, this year I will not have that privilege.

Fuzzy began suffering from kidney failure over the Christmas holidays. I managed to stabilize her with daily fluid injections for over 2 months. In the last few days, she grew weaker and started losing motor control. on March 5, 2002 I was forced to put her to sleep.

However, what will stay with me forever is not how she died, but how she lived. Let me introduce you to a truly unique friend….

The first time I laid eyes on her, she was in a cage with her two brothers who were asleep. She came to the front of the cage and meowed at me. When I opened the cage and she ran straight up my arm, sinking tiny pitons into my flesh and finally parking herself on my shoulder as if she had claimed me as her own. When I regarded her with a quizzical expression she simply began cleaning herself, all the while keeping her balance through a injudicious application of her very sharp claws.

After the sting and the blood loss subsided I figured out that I had been adopted by the cat. The paperwork was just a formality. Her adoption papers list her name as “Zen.” this was one of three names that she would have in her life and the briefest of the three, for reasons that will become apparent as this story continues.

The newly christened “Zen” was placed in a cardboard box which occupied the passenger seat on the ride home. This was when I discovered that Zen/Fuzzy was not a great car cat. In fact it is fairly safe to say she loathed cars with a passion cats normally reserve for vacuum cleaners and small dogs named “Poopsie.”

By the time I arrived at my apartment, she had wound herself up into a frenzy. As I shifted the box to my left hand in order to punch in my door code, she burst from the cardboard prison like psychotic food processor on crystal meth and simply vanished.

I was devastated and feeling a bit used. Had this pint sized grifter just tagged me to assist in her jail break? I searched everywhere and could not find her. Eventually it grew dark and I went home to find a beer and a bucket of Bactine.

Two days later, I notice one of my neighbors calling “here kitty, kitty” down into this old destroyed basement that bordered the property of the apartment complex. Sure enough, it was my kitten and she wanted nothing to do with either of us. She continued to sit far in the back of the basement and make pitiful noises.

Realizing that this was going to take more hands than I had, I called my friend Aaron to help me with my rescue mission. Aaron came over and after a bit of debate we agreed that I would go into the basement and he would guard the exit.

I descended into the ruined structure and crawled across the dirt floor. The three foot ceiling left little room to stand and I finally made it to the corner where the kitten sat regrading me blandly. As I reached for her she darted past me with the ease of an NFL veteran running back and raced through the exit. I heard a loud “Woop” and some really fine swearing, then a stunned silence.

With a sigh I trudged out of the basement and we started to search. This kitten had the stealth of a special forces commando. I only found her when I stepped on the pile of leaves she was hiding in. She shot out from under me like a rocket and we chased her for two blocks before finally cornering her in a neighbors porch and grabbing her. She did not go quietly and I have the scars to prove it.

Finally I got her back to the apartment where she promptly hid and would not come out….

That is until she realized that the human she had adopted was able to dispense food.

At that point she decided I had my uses and could stay if I didn’t make too much noise and continued to earn my keep.

It was soon apparent that the cat was far from Zen-like and she was re-christened “Schrodinger” after the cat in the box experiments. Schrodinger/Fuzzy appeared to have some rather odd personality quirks, one of which was her strange attraction to paper bags. She would drag a paper bag out on to the hard wood floors of my apartment and line it up just so. She would then move to the far corner, hunker down, get a running start and dive into the paper bag. The paper bag would zip across the floor like a cruise missile on acid, until it ran out of momentum or, often as not, hit the far wall with a rather meaty thunk. Schrodinger/Fuzzy would then climb out of the bag drag it back to the center of the room and repeat the process until she was bored (or perhaps unconscious).

I had grown accustomed to this odd behavior and really had not thought to comment on it when my friend Ryan (AKA Jimmy Ether) came over to visit one day. We were sitting on the couch talking when Schrodinger/Fuzzy began her paper bag ritual.

The third time around Ryan looks at me and says “Dude… your cat is messed up.” 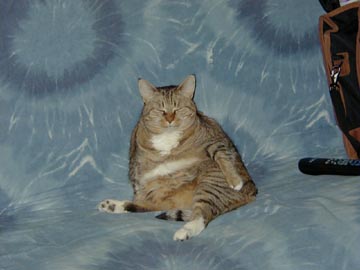 Schrodinger/Fuzzy continued to supply entertainment in a number of ways. Sometimes it was the freaky “ka ka ka ka ka” sound she made when she watched the squirrels in the back yard. Another time it was the failed attempt to walk on bath bubbles. bloop Into the water she went. It is difficult for a cat to remain dignified when she is soaked to the tip of her tail and sporting a little pile of soap bubbles on her head, but she tried.

As she grew older and winter came, she developed a fondness for sleeping under the blankets between my feet. She would burrow down and stay most of the night. One night, at about 3 am, she decided to help me out with what she felt were some hygiene issues. As I lay sleeping… on my stomach… in the buff… she decided to help me by cleaning my butt. I awakened from a deep sleep with a feeling like someone was running a belt sander on the crack of my ass. I shot forward like an Olympic sprinter and crashed head on into the wall. After that, Schrodinger/Fuzzy decided that I could tend to my own hygiene after that.

Later on, I began dating a women named Isadora. She had an 8 year old son, Robert, who drove the cat nuts. In truth, he only wanted to pet and hold her, but he was really hyper and she got so freaked out she began pulling her hair out along her back. This led to her third and final name “Fuzzy.” It’s from the children’s rhyme:

The vet called it “Neurotic Self-Mutilation” and prescribed valium. For those of you who are curious, a cat on valium is a truly pathetic creature. She would try to jump onto the table and miss, or slowly fall out of your lap, like Jello oozing off of a plate. After a while we stopped giving her the valium and she appeared to return to normal. At least normal for her.

Once, when I was back living by myself on the 10th floor of the Art Center Towers, Fuzzy was exploring the apartment for cat friendly places when she jumped up onto the window ledge and discovered that she was much higher than cats were meant to be. This led to hasty retreat and a day spent cowering under the bed, after which, she was fine with the height and even liked to sun herself on the ledge. 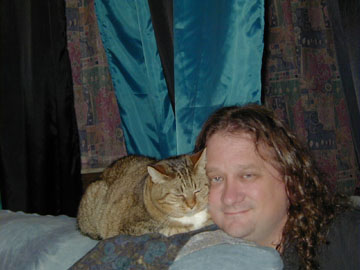 One thing that really struck me was after she got sick, she came up one evening and curled up in Kim’s lap. (Those of you who know Fuzzy are aware of her usual disdain for strangers) I did not realize it at the time but I think she was giving her approval as well as passing the torch. She did her usual, turn around 3 times, settle into the lap and hiss at the owner of the lap. I think she was trying to say, “Be good to this guy or I will come back and piddle on your sneakers.” I find that weirdly touching and I am very glad these two special ladies got a chance to meet.

Fuzzy always seemed to be in her own little world. She would sharpen claws that she no longer had, hiss at people even when she was curled up in their lap and occasionally fall asleep flat on her back with all 4 paws in the air. She would chase her tail and chase things only she could see. She also decided that the best way to wake me up in the morning was to clean my beard, even chewing on it if I didn’t move quickly enough for her. She knew my moods and would curl up in my lap or bump her head against me when I was down.

Fuzzy was my best friend and her passing leaves a cat sized hole in my heart.